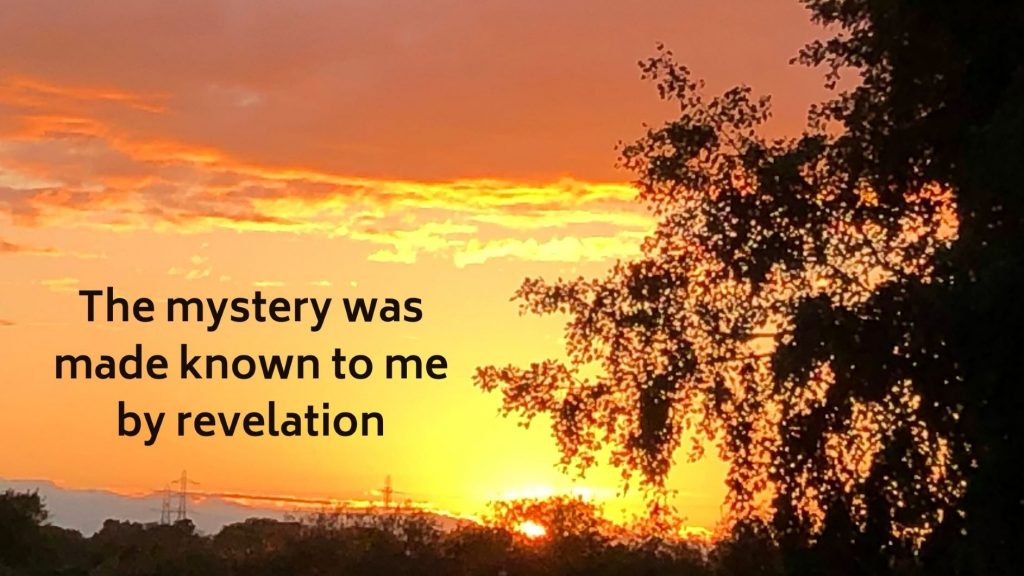 1 For this reason I, Paul, a prisoner of Christ Jesus on behalf of you Gentiles — 2 assuming that you have heard of the stewardship of God’s grace that was given to me for you, 3 how the mystery was made known to me by revelation, as I have written briefly. 4 When you read this, you can perceive my insight into the mystery of Christ, 5 which was not made known to the sons of men in other generations as it has now been revealed to his holy apostles and prophets by the Spirit. 6 This mystery is that the Gentiles are fellow heirs, members of the same body, and partakers of the promise in Christ Jesus through the gospel.

In the last section of Ephesians we saw the church as the dwelling place for God. This time Paul reveals the mystery of Christ.

The Stewardship of God’s Grace

Paul was a prisoner in Rome when he wrote the letter to the Ephesians. He had some freedom during the day but was chained to a Roman guard at night. However, he saw himself as a prisoner of Christ Jesus. He devoted his life to Christ and being a prisoner was no surprise to Paul. He had suffered many persecutions for his belief in Christ (2 Corinthians 11:23-27). However if Paul had not been imprisoned we may never have had the epistles he wrote in prison.

Paul took seriously the fact that he had been entrusted with the gospel of God’s grace. The word “stewardship” is the English translation of  the Greek word oikonomia which can also be translated administration or dispensation. It means managing and utilising a household’s resources. Wealthy Greek families would have servants and the steward was the one who knew all about the stock of supplies the household had or required. Jesus Christ used the position of  the steward (sometimes translated manager) in parables (Luke 12:42, Luke 16:1).

The gospel of grace was entrusted to Paul to deliver, especially to the Gentiles. Paul understood the grace of God to be the very essence of the mercy, steadfast love, compassion and generous nature of God. God gives us what we do not deserve, redemption through His Son, the Lord Jesus Christ. That redemption was not only for the Jews but for the Gentiles. This was made known to Paul by revelation.

The Mystery of Christ.

Revelation is when something that is already there is revealed (see the post on Paul’s Prayer ). Paul has a mystery revealed to him by revelation. What was that revelation? The mystery of Christ.

It is one thing to accept that Jesus Christ who lived on this earth about 2000 years ago, was crucified and raised from the dead. Many people do not believe this happened. Was that the mystery Paul is referring to? No. The mystery is even harder to comprehend and believe than that. Through the death and resurrection of Jesus Christ God opened the way for Him to inhabit man! For us to be in Christ and Christ to be in us.

God created man because he wanted to fellowship (have a close relationship) with the people he created. But more than that He wanted to dwell in His people. Let me try and explain.  God created mankind in His own image (Genesis 1:27). He created man in such a way that He as God could dwell in that human form and still be God.

Jesus was fully God and fully man at the same time. God created the human form to be so compatible with Himself that God could dwell in a human form. So, as God came to this earth in Jesus Christ, born as a baby, growing up in a family, working in a job, ministering for over three years through to His death on the cross. For about 33 years God dwelt in a human body. God the Son, the Lord Jesus Christ, Immanuel, God with us  (Isaiah 7:14, Matthew 1:23) lived on this earth in a human body.

The Mystery of us being in Christ

But, this did not stop with God just coming in human form in Jesus Christ. When Jesus died and was raised from the dead the payment for sin was made. Through the blood of Christ sin and death were conquered (Romans 5:17, 8:2).  Through the grace of God we received forgiveness of sins by faith and became the righteousness of God in Christ (2 Corinthians 5:21). Now we are in Christ, as Paul put it earlier in this letter “in Christ with every spiritual blessing in the heavenly places” (Ephesians 1:3). Those who live by faith in Christ are in Christ and the Holy Spirit dwells in them.

God always intended to dwell with mankind. In the first book of the Bible we read that God walked in the garden that He placed Adam and Eve in (Genesis 3:8). He dwelt with them before the fall of man. In the time of Moses God declared “I will dwell among the people of Israel and I will be their God” (Exodus 29:45). King David wanted to build a house that God could dwell in (2 Samuel 7:2). In the last book of the Bible God says “the dwelling place of God is with Man” (Revelation 21:3). In the book of Revelation we see Jesus Christ is closely associated with His church, walking in the midst of the churches (Revelation 1:12-13), the marriage to His bride (Revelation 19:6) then then returning with His saints (Revelation 19:11-14).

The Mystery of the Holy Spirit in us

On top of this wonderful mystery Paul was also amazed that God would pour out this wonderful gift on the gentiles. The Jews believed that the gifts of God were for the covenant people. They really struggled with the revelation that the Holy Spirit was poured out on all peoples from all nations. That the gentiles should be “fellow heirs, members of the same body, and partakers of the promise in Christ Jesus through the gospel”.

In the next post we will look at the unsearchable riches of Christ, the mystery hidden for ages. We will continue to marvel in the revelation that “God is with us” and “Christ may dwell in your hearts by faith”