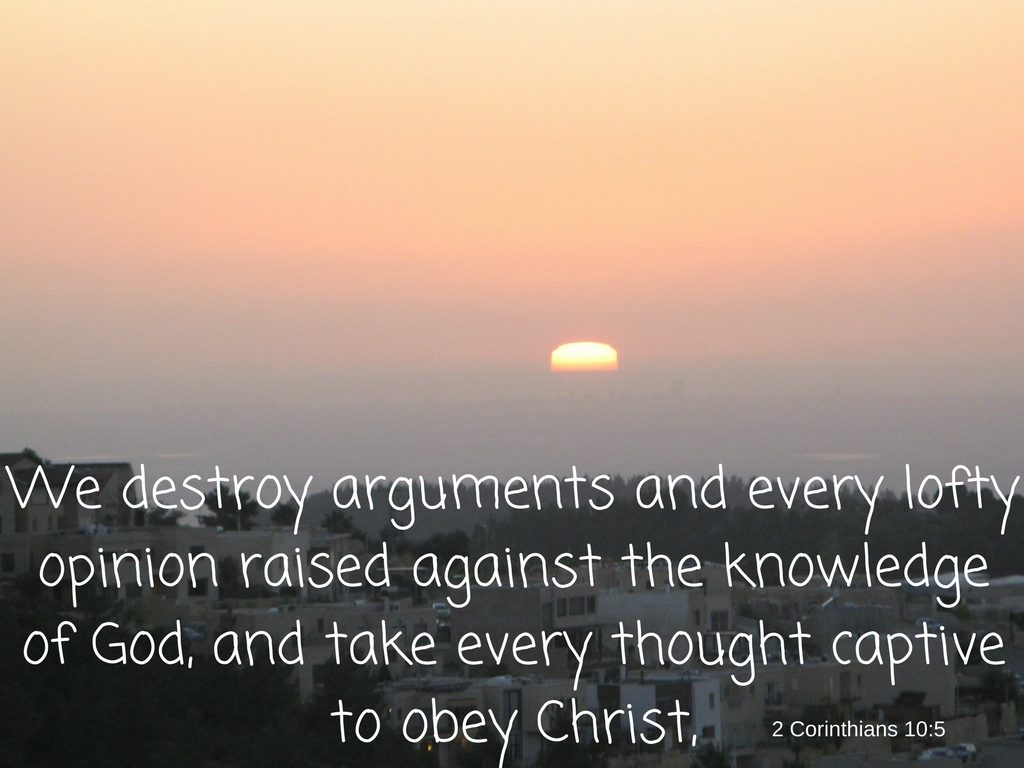 Why do thoughts have such negative consequences at times?

1 I, Paul, myself entreat you, by the meekness and gentleness of Christ-I who am humble when face to face with you, but bold toward you when I am away!-
2 I beg of you that when I am present I may not have to show boldness with such confidence as I count on showing against some who suspect us of walking according to the flesh. – 2 Corinthians 10:1-2

I like the way the NLT translates this passage:

1 Now I, Paul, appeal to you with the gentleness and kindness of Christ–though I realize you think I am timid in person and bold only when I write from far away.
2 Well, I am begging you now so that when I come I won’t have to be bold with those who think we act from human motives.

The first translation has a feeling of Paul touting who he is whereas the NLT shows humility. He who is to be great must be the lease:

25 And he said to them, “The kings of the Gentiles exercise lordship over them, and those in authority over them are called benefactors.
26 But not so with you. Rather, let the greatest among you become as the youngest, and the leader as one who serves. – Luke 22:25-26

Paul was a man of humility but he was not afraid to speak the truth in love.

15 Rather, speaking the truth in love, we are to grow up in every way into him who is the head, into Christ,
16 from whom the whole body, joined and held together by every joint with which it is equipped, when each part is working properly, makes the body grow so that it builds itself up in love. – Ephesians 4:15-16

Paul knew that we need to be fed the truth to grow and the Spirit of God works in our hearts to make that truth a reality:

We need to grow spiritually and that is sustained through hearing the truth:

16 But they have not all obeyed the gospel. For Isaiah says, “Lord, who has believed what he has heard from us?”
17 So faith comes from hearing, and hearing through the word of Christ. – Romans 10:16-17

3 For though we walk in the flesh, we are not waging war according to the flesh.
4 For the weapons of our warfare are not of the flesh but have divine power to destroy strongholds.
5 We destroy arguments and every lofty opinion raised against the knowledge of God, and take every thought captive to obey Christ,
6 being ready to punish every disobedience, when your obedience is complete. – 2 Corinthians 10:3-6

The word flesh in Hebrew is “basar” and means “of the body, by extension – a person or mankind”. It is used often in Genesis: they shall become one flesh (Genesis 2:24) ; all flesh had become corrupted (Genesis 6:12); God made a covenant with all flesh that is on the earth (Genesis 9:16); Abraham’s house circumcised the flesh of their foreskins (Genesis 9:17) – and also extensively in Leviticus. In the New Testament the Greek word for flesh is sarx and refers to: the soft substance of the living body, which covers the bones and is permeated with blood; the body or the human nature – the earthly nature of man apart from divine influence, and therefore prone to sin and is opposed to God

Jesus referred to the flesh:

Matthew 26:41 (NKJV) “Watch and pray, lest you enter into temptation. The spirit indeed [is] willing, but the flesh [is] weak.”

Here Paul reveals the spiritual principle that to over come the desires of the flesh we need to use the weapons of our warefare to control our thoughts life. That’s where it all begins. As James puts it:

14 But each person is tempted when he is lured and enticed by his own desire.
15 Then desire when it has conceived gives birth to sin, and sin when it is fully grown brings forth death. – James 1:14-15

7 Look at what is before your eyes. If anyone is confident that he is Christ’s, let him remind himself that just as he is Christ’s, so also are we.
8 For even if I boast a little too much of our authority, which the Lord gave for building you up and not for destroying you, I will not be ashamed.
9 I do not want to appear to be frightening you with my letters. – 2 Corinthians 10:7-9

We are all one in the body of Christ. Yet our experience tells us that there are a lot of divisions in the church of Christ. Jesus prayed we would be one:

23 I in them and you in me, that they may become perfectly one, so that the world may know that you sent me and loved them even as you loved me. (John 17:23)

So how come this seems to have been destroyed? Well, In one sense it has not. True Christians across all denominations have essential beliefs in common: belief that Jesus is God and that He was raised from the dead. All true Christians have the Holy Spirit living in them.  When we meet new people in the Body of Christ we experience a oneness no matter how diverse our backgrounds. God invented diversity. He rejoices over and loves every single one of us. He designed us to each reflect a different aspect of His divine nature. But together we reflect His glory so much more. As a diamond has many facets that reflect the light gloriously so the Body if Christ, together as one, reflects the glory of God to a dying world. Jesus prayed:

And I am no longer in the world, but they are in the world, and I am coming to you. Holy Father, keep them in your name, which you have given me, that they may be one, even as we are one. – John 17:11

Paul was confident that God had given him authority to build up the Corinthian church. He did not want to hurt or scare them but he was committed to speaking the truth in love. He knew if Christ was glorified they would be one, and we too as we glorify Christ will know we are one with Him and be one with each other.

10 For they say, “His letters are weighty and strong, but his bodily presence is weak, and his speech of no account.”
11 Let such a person understand that what we say by letter when absent, we do when present.
12 Not that we dare to classify or compare ourselves with some of those who are commending themselves. But when they measure themselves by one another and compare themselves with one another, they are without understanding. – 2 Corinthians 10:10-12

This is a well known passage that responds to the idea mentioned earlier. The idea that some people in the church at Corinth were saying that Paul was prepared to be confrontational in his letters but not in person. He maintains that he is the same however he communicates. But he then resorts to sarcasm again. He implies “People who measure others against themselves because they are ‘so important’ totally lack understanding ”. People who are proud are ignorant of the mercy of God. They lack understanding.

He has told you, O man, what is good; and what does the LORD require of you but to do justice, and to love kindness, and to walk humbly with your God? – Micah 6:8

“Paul’s humility and complete reliance on the power of God instead of the power of his own personality, coupled with his strong letters, were being used against him. They said Paul was like a dog that barks like crazy at a safe distance but is a coward when confronted face to face.”

Humility is such a key attribute of God. The Lord was humble and He has given us the Spirit of humility who always seeks to glorify Jesus.

In the same way, you younger men must accept the authority of the elders. And all of you, serve each other in humility, for “God opposes the proud but favors the humble.” – 1 Peter 5:5

Humility is not belittling yourself but glorifying another. Jesus glorified His Father in all that He did:

4 I brought glory to you here on earth by completing the work you gave me to do. 5 Now, Father, bring me into the glory we shared before the world began. – John 17:4-5 (NLT)

31 As soon as Judas left the room, Jesus said, “The time has come for the Son of Man to enter into his glory, and God will be glorified because of him. 32 And since God receives glory because of the Son, he will soon give glory to the Son. – John 13:31-32 (NLT)

13 But we will not boast beyond limits, but will boast only with regard to the area of influence God assigned to us, to reach even to you.
14 For we are not overextending ourselves, as though we did not reach you. For we were the first to come all the way to you with the gospel of Christ.
15 We do not boast beyond limit in the labors of others. But our hope is that as your faith increases, our area of influence among you may be greatly enlarged,
16 so that we may preach the gospel in lands beyond you, without boasting of work already done in another’s area of influence.
17 “Let the one who boasts, boast in the Lord.”
18 For it is not the one who commends himself who is approved, but the one whom the Lord commends. – 2 Corinthians 10:13-18

Oh what a wonderful day when Christ boasts over us. When He proudly presents His bride. When He rewards those who have been faithful to Him. We usually see boasting as a negative characteristic probably because we were taught as children not to boast. But boasting in the Lord is fine. He has done great things that should be declared and made manifest to a lost world. Christ will reward His faithful servants:

And he said to him, ‘Well done, good servant! Because you have been faithful in a very little, you shall have authority over ten cities.’ – Luke 19:17

But it is His faithfulness, His leading, His power that makes it all possible.

David in the Psalms knew how to boast in the Lord:

My soul makes its boast in the LORD; let the humble hear and be glad. – Psalm 34:2

Let’s feel free to boast in the Lord today and give Him the glory in all that we say and do.

Posted in 2 Corinthians
← If you sow sparingly will reap sparingly.But I am afraid…..your thoughts will be led astray from a sincere and pure devotion to Christ. →