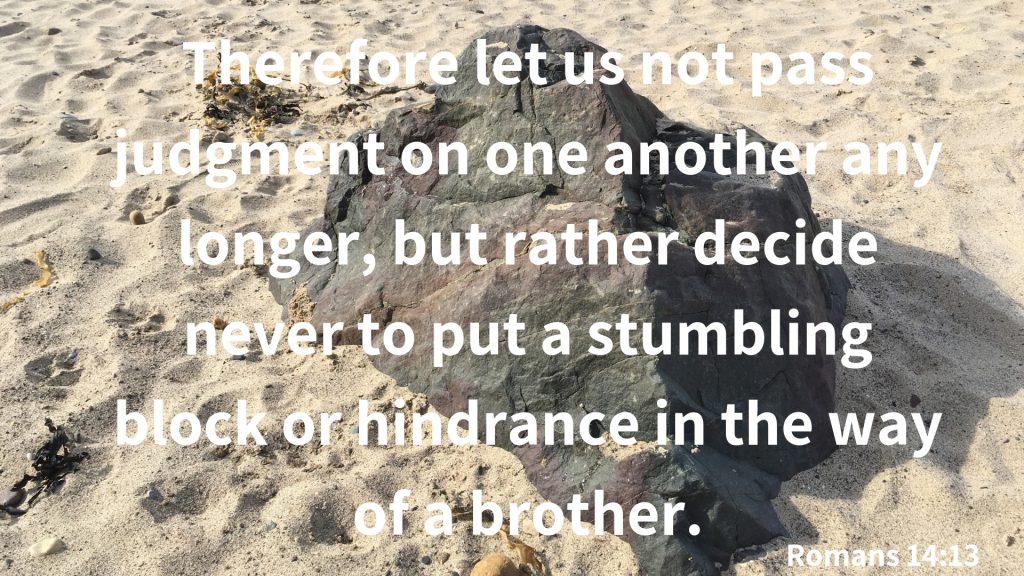 13 Therefore let us not pass judgment on one another any longer, but rather decide never to put a stumbling block or hindrance in the way of a brother.
14 I know and am persuaded in the Lord Jesus that nothing is unclean in itself, but it is unclean for anyone who thinks it unclean.
15 For if your brother is grieved by what you eat, you are no longer walking in love. By what you eat, do not destroy the one for whom Christ died.
16 So do not let what you regard as good be spoken of as evil. – Romans 14:13-16

A stumbling block or a hindrance is something that may cause another person to fall into sin. If you judge a person they may react with anger. If you condone a person’s misbehaviour they may fall into worse sin. We are to lead people to Jesus – not into sin.

1 And he said to his disciples, “Temptations to sin are sure to come, but woe to the one through whom they come!
2 It would be better for him if a millstone were hung around his neck and he were cast into the sea than that he should cause one of these little ones to sin. – Luke 17:1-2

Interesting that Paul states nothing is unclean in itself but it is our attitude that counts. We need to remember he is talking about food mainly here. Although there is a spiritual principal revealed here, this is not a licence to sin. The word unclean is directing attention to the Jewish food laws. However Peter had the vision about clean and unclean food that led him to understand that the gospel was for the Gentiles (Acts 10:9).

This ties in because it was the food laws that was causing a problem here between the Jewish believers and the Gentile believers. If you as a Jew were ministering to a Gentile and they invited you to eat with them, sticking to the laws on food would cause a real barrier to sharing the gospel and having Fellowship. Paul wanted to get the message across that your old man is dead in Christ and you are a new creature. A minister of grace. We regard the gospel as good and want it to be shared with everyone. But, our behaviour could be a stumbling block, could deny the truth of the gospel leading others to believe or say negative things about believers. Paul led by example and did not let anything prevent the gospel being taught:

9 for which I am suffering, bound with chains as a criminal. But the word of God is not bound!
10 Therefore I endure everything for the sake of the elect, that they also may obtain the salvation that is in Christ Jesus with eternal glory.
11 The saying is trustworthy, for: If we have died with him, we will also live with him; – 2 Timothy 2:9-11

Posted in Romans
← What is the Judgment?Righteousness peace and joy →