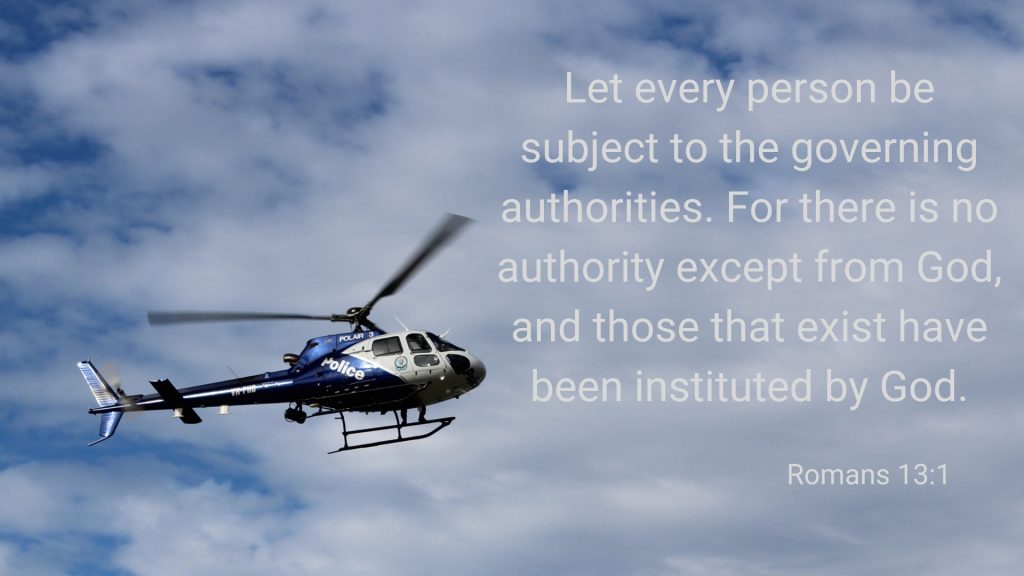 1 Let every person be subject to the governing authorities. For there is no authority except from God, and those that exist have been instituted by God.
2 Therefore whoever resists the authorities resists what God has appointed, and those who resist will incur judgment.
3 For rulers are not a terror to good conduct, but to bad. Would you have no fear of the one who is in authority? Then do what is good, and you will receive his approval,
4 for he is God’s servant for your good. But if you do wrong, be afraid, for he does not bear the sword in vain. For he is the servant of God, an avenger who carries out God’s wrath on the wrongdoer.
5 Therefore one must be in subjection, not only to avoid God’s wrath but also for the sake of conscience. – Romans 13:1-5

It can be hard at times to accept that authorities are put in place by God. Especially when they are godless and actively persecute those who believe in Christ. But, God is the Lord of all. His will will be done on earth as it is in heaven. He has good reasons for who He appoints in national leadership. You can see that in the Bible. His purposes are worked out through the nations.

This passage is speaking more of the system of law and order within a society. If people break the law they reap the consequences. If you remain honest and law abiding you should have nothing to fear. If you do evil then you should have a fear of punishment. Without it there can be no law and order. We should be subject to the governing authorities, law abiding citizens.

Of course there will be authorities that are against the gospel of Christ who will try and suppress the truth. In those circumstances the law of God to love Him above all else and love one another overrides the authority of man. But not to commit evil – of but to preach the good news. When Stephen, the first Christian to be martyred, led by the Holy Spirit preached to the Pharisees he recounted the history of the rejection of those God sent to call the nation of Israel to repent. He ended saying:

51 “You stiff-necked people, uncircumcised in heart and ears, you always resist the Holy Spirit. As your fathers did, so do you.
52 Which of the prophets did your fathers not persecute? And they killed those who announced beforehand the coming of the Righteous One, whom you have now betrayed and murdered,
53 you who received the law as delivered by angels and did not keep it.” – Acts 7:51-53

If authorities break the law of God then they will be judged. But that is in God’s hands not ours. We may be called to share the gospel in breach of a human authority. Peter said:

14 But even if you should suffer for righteousness’ sake, you will be blessed. Have no fear of them, nor be troubled,
15 but in your hearts honor Christ the Lord as holy, always being prepared to make a defense to anyone who asks you for a reason for the hope that is in you; yet do it with gentleness and respect,
16 having a good conscience, so that, when you are slandered, those who revile your good behavior in Christ may be put to shame.
17 For it is better to suffer for doing good, if that should be God’s will, than for doing evil. – 1 Peter 3:14-17

The issue is honouring Christ the Lord as holy in our hearts. And being prepared to share the good news as the opportunity arises, without fear. As Peter and John said, when they were told not to preach in the name of Jesus:

19 But Peter and John answered them, “Whether it is right in the sight of God to listen to you rather than to God, you must judge,
20 for we cannot but speak of what we have seen and heard.” – Acts 4:19-20