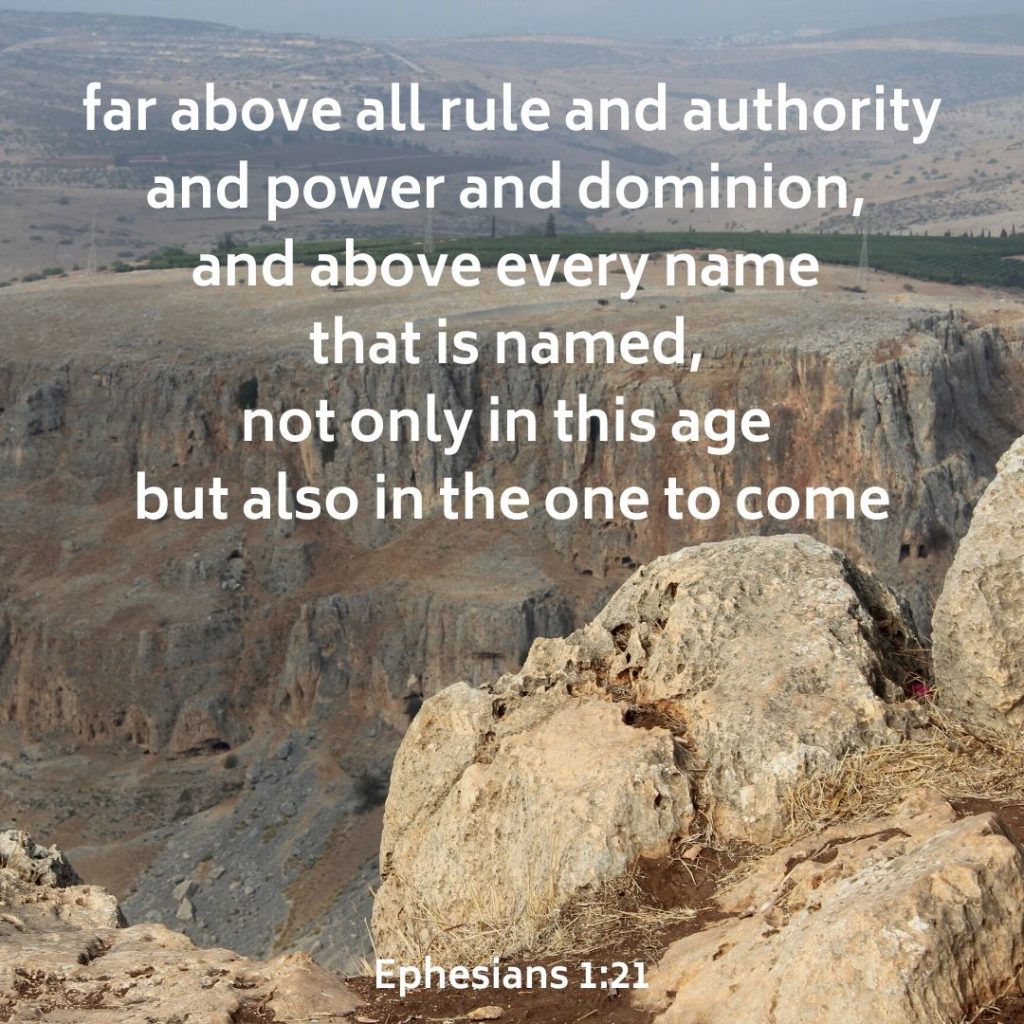 …and what is the immeasurable greatness of his power toward us who believe, according to the working of his great might that he worked in Christ when he raised him from the dead and seated him at his right hand in the heavenly places, far above all rule and authority and power and dominion, and above every name that is named, not only in this age but also in the one to come.

Throughout the ages people have recognised that God is mighty and powerful. Moses mentioned the great power and mighty hand of God, who brought the children of Israel out of Egypt, when asking God to forgive them (Exodus 32:11). Job 38 records the awesome power of God. The prophet Micah wrote these words from God:

But as for me, I am filled with power, with the Spirit of the LORD, and with justice and might, to declare to Jacob his transgression and to Israel his sin. (Micah 3:8)

We see the might and power of God in creation. We feel weak against the power of the sea, the weather, mountains, wild animals and the vastness of the universe!

When I look at your heavens, the work of your fingers,
the moon and the stars, which you have set in place,
what is man that you are mindful of him,
and the son of man that you care for him?
Psalm 8:3-4

But, God does care for us.  He is strong but he wants to give us peace (Psalm 29:11). So much so, that he made away for us to have a close relationship with Him. By His might and power, raising Jesus His Son from the dead, He gives us life and peace.

Jesus is alive! Resurrected from the dead, sitting above in the heavenly places at the right hand of God (see also Colossians 3:1). Jesus is victorious over death (1 Corinthians 15:56-57). God raised Him from the dead as verification that He accepted the sacrifice Jesus payed for the sins of the world. Now all you have to do is respond to that free gift (see the gospel post). We see the might and power of God working in the resurrection. We see victory over the satanic forces that want to steal, kill and destroy us (John 10:10).

for the LORD your God is he who goes with you to fight for you against your enemies, to give you the victory. (Deuteronomy 20:4)

But thanks be to God, who gives us the victory through our Lord Jesus Christ. (1 Corinthians 15:57)

Why is it important to see Jesus seated at the right hand of God? Well, this relates to the seventh day of creation. On the seventh day, when He had finished creation, God rested from all His work (Genesis 2:2). When Jesus was dying on the cross he called out “It is finished” (John 19:30). He had finished the work His Father had sent Him to do. Having won the victory and finished the work He was sent to do He is now seated at the right hand of the throne of God. This was prophesied in Psalm 110:

The LORD says to my Lord: “Sit at my right hand, until I make your enemies your footstool.” (Psalm 110:1)

All our enemies were vanquished at the cross, the greatest of them being death.  We do not see death as an enemy. We see it as a fact of life, ironically. But the reality is humanity was not originally destined to die. Death came about as a result of the fall of man. God warned Adam that if he ate from the tree of the knowledge of good and evil he would “surly die” (Genesis 2:17). Death came into the world because of sin (Romans 5:12).  In fact the Bible teaches that we are dead in our sins (Ephesians 2:1) and are only made alive when we are in Christ. We’ll look at this in more detail when we reach Ephesians chapter 2.

Christ is “above all rule and authority and power and dominion”. There are forces that rule the world. No, this is not a conspiracy theory. There are Rulers and Governments that rule countries. Armies, that protect, police forces and judiciary systems that keep the the rule of law. We need this to maintain civilisation. However the Bible teaches that there are spiritual forces also at work in this world. Later in Ephesians Paul writes:

When we get to Ephesians chapter 6 we will look at this in more detail.

But, for now we need to recognise that Jesus is the Lord of Lords and the King of Kings. One day every knee shall bow and every tongue confess that Jesus is lord (Romans 14:11). He is above all rule authority and all things are under His command.

The Bible places a lot of emphasis on names. In the ancient near east people were given names that had important meaning. Adam means “red coloured” as Adam was formed from the dust of the earth. Abraham means “father of a multitude” as that was the promise he was given by God. There are dictionaries of Biblical Names if you want to study this further.

I bow down toward your holy temple
and give thanks to your name for your steadfast love and your faithfulness,
for you have exalted above all things
your name and your word. (Psalm 138:2)

In the next post we will look at Christ the Head of the church, His body.

Posted in Ephesians
← Paul’s PrayerHead over all things. →